Why Hasn't Newhart Been Released On DVD? 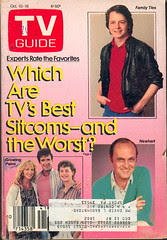 Image by trainman74 via Flickr
Newhart was a funny, classy, slow. And it's not just me who thinks so. Both my brothers -- Darryl and my other bother Darryl -- agree.

The series ran from 1982 to 1990. So, why hasn't it been released on DVD? Doesn't MTM want to make any money? Are they waiting for Bob Newhart to, you know, die?

Have the terrorists won?

Why are we being punished?

And that's the way the Ball bounces.

Posted by BallBounces at 1:23 AM

Bit of trivia: Which Daryl is never referred to as "My other brother Daryl"? BTW Newhart is on Comedy Gold cable channel 5 nights a week.

1. Never heard of it -- must be a western thing.
2. We ditched cable.
3. I like to, no must watch episodes in sequence, and this is very difficult to do watching them on a network.

One bucket of nothing. Ha ha ha. Still chuckling over that one, Joe!

Actually... it has been released on DVD.
http://www.amazon.ca/Newhart-Season-1-Bob/dp/B000YKYT1M

Hey there RK, I totally agree with you. I would go a whole week without coffee just to get seasons of Newhart on DVD.

I saw him in concert a few years back. A class act all the way.

BTW, Season one is available on DVD and has been for some time.

Season one only -- I'm talking about the series.

Leeky -- I'm talkin' the whole enchilada. Being able to get season one only -- and this has been the case for a few years now -- just increases the punishment.

RK, I heard a rumour (emphasize rumour) that Bob wasn't happy that the studios weren't releasing the entire series of the earlier "Bob Newhart Show." Therefore, he was blocking release of his later series.

Leeky -- I read something like that too. I have seasons 1-4 of the Bob Newhart show, in fact, I have season four here with me in Singapore.

So, maybe the Bobster is dragging his feet. It should be a human right for studios to release these classic boomer shows on DVD. Where are the human rights police when we need them??!!

Thanks for the info. Now, should I wait for the price to come down?! Decisions, decisions!

The way the Ball bounces

BallBounces
Toronto, Ontario, Canada
When nothing else could help... love lifted me.